A FRIEND OF WES PARKER'S 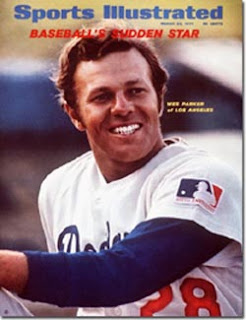 Every baseball family has a story.  In our case, instead of catching a foul ball behind first base, we caught a first baseman.  And like any out-of-work writer, I got it all down on paper way back then, and now it reads like a bit of Dodger history.  It started when my son the Little Leaguer asked me for a stamp and the address of Dodger Stadium.  He had a fourth-grade pen pal assignment, and since all his heroes were Dodgers, I could see where this was going.  I cautioned, as mothers do, against high expectations since the 1965 Dodgers were in a tight pennant race and I assumed they’d be pretty much wrapped up in their work.  Sure enough, he struck out first with Sandy Koufax, then Don Drysdale.  So he said the heck with pitchers.  The Dodgers, after all, had a Gold Glove first baseman.  So he wrote:  Dear Wes Parker.  My Little League team is in second place.  I play first base and sometimes pitch.  How can I get to be a bat boy on the Dodgers?  Sincerely,  Don.
Two weeks later a letter arrived, addressed in southpaw handwriting with a Dodger logo in the corner.  Dear Don, it said in the writing that leaned toward left field.  Thanks for your letter.  Nice going in Little League.  You could find out about the bat boy job by writing the Dodger front office.  Sincerely, Wes Parker.
Of course, he thought that was the biggest thing ever!  And he sure was peeved when I made him turn off the radio and go to bed during the third inning -- whining about how he had a friend on the team.   And he even had a goofy dream about the Dodgers.  He said they were standing along the third base line, looking heroic in white home team uniforms while they recited in unison what sounded suspiciously like the Little League pledge.  And those villainous Giants jeered from the visitor’s dugout the whole time.
So he worried the Dodgers through the final days of the pennant race, and right into the 1965 World Series!  I think my son the Little Leaguer was nervous for his friend the big leaguer who was playing in his first World Series.  Little League had taught the kid that baseball provides unlimited opportunities for a guy to screw up while a whole lot of people watch.  But if you look it up, you’ll see that his Dodgers won the series in seven games over Minnesota and his pen pal, Wes Parker, batted .304 and performed flawlessly at first base.  What’s more, the following season, the big leaguer fielded every letter the Little Leaguer mailed his way.  Evidently using his time on the road for letter writing, he replied once from Pittsburgh and once from Atlanta.  Overwhelmed by this response, my son recklessly decided to take this pen-pal thing to the next level.
And that’s why, a couple of weeks later, we were waiting in the smoggy, late-afternoon sunshine in parking lot number six in back of Dodger Stadium.  We waited a long time at the bottom of a ramp watching some big glass doors at the top.  A few people had come out, but no Dodgers.  I noticed there were very few cars left in the lot.  One of them, we hoped, belonged to Wes Parker who had promised to meet us here.  I said don’t worry, he’ll be here, but it sure had been a long time since the game was over, and the kid was fretting and mumbling that he wouldn’t know what to say to a real, live big leaguer, anyway.
But there he was!  I remember so well how the tall, blond figure in the yellow sweater took on a golden luster as he stepped out into the sunlight.  He started down the ramp and as soon as he saw us, he called out, “Hi.”  But my son the Little Leaguer was too busy grinning to reply.  Then they were shaking hands, and he needn’t have worried about what to say, because before he knew it, the Little Leaguer was telling the big leaguer about his one-hitter and about how he had started a triple play.  And then there were people around them with autograph books, and the big leaguer smiled and signed while he and the Little Leaguer kept talking baseball.  And when the people were gone, Wes Parker – the real live Wes Parker – told my son how he had hit only one home run in Little League, and my son told how he had hit the fence once, but had never hit one over.  They discussed pick-off plays, switch-hitting, practicing on your front lawn, and paying for broken windows.  I noticed that, as they talked, they were moving slowly in the direction of a small, red sports car.  The Little Leaguer told the big leaguer about his funny dream and about having to go to bed during the third inning, and I remember how Parker laughed about that and clapped him on the shoulder.  Then they were alongside the red sports car and I remember thinking: I’ll bet the  kid is having fleeting thoughts of inviting him to dinner, or asking to meet him at the park for catch.  Anything to keep from losing him.  But he didn’t.  He just shook hands and smiled.  And the last thing Wes Parker said before he drove off was,  “Did you ever find out about the bat boy job?”  And my son said, “No,” and they both grinned because it didn’t matter.
And when we drove out of the empty parking lot, the man who opened the gate for us asked if we got lost inside.  My son the Little Leaguer, trying his best to be cool, said, “No, I‘m a friend of Wes Parker’s.” 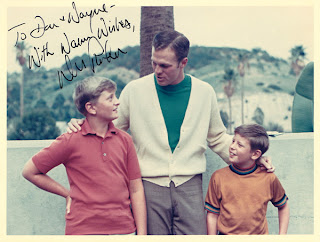