All-but-forgotten today, Eubie Blake was a black music pioneer who participated in 100 years of African American history. Yes, he lived to be 100, and I met him in 1978 to do an article that would appear on his 95th birthday.  The son of former slaves, he was playing piano in a Baltimore brothel at age 15, and at 95 he was giving Johnny Carson fits on the Tonight Show.  And in between, he changed the course of American music as a ragtime pioneer, composer for the musical stage, and by his strong influence on stride piano, the style that bridged the gap between ragtime and a wealth of later jazz piano – a contribution for which he seldom gets credit.
Eubie (no one ever called him anything else) was a spry 94-year-old who liked my car, an aging high-rider because of its easy access, and I became his designated ride whenever he was in L.A.  I drove, he talked.  A lot!  And he had plenty to brag about, whether it was beating Jelly Roll Morton at pool, opening the first all-black musical on Broadway, or testifying before Congress on behalf of copyright holders.  He told me his father always said “Never mess in white folks business,” yet in 1922, with pressure from his music publisher, he was admitted to ASCAP – one of its first black members.  “See, I was somebody then,” he smiled.  He was already known for many original rags when he teamed up with lyricist Noble Sissle to write five Broadway shows from which came many all-time standards including “I’m Just Wild About Harry” and “Memories of You.”
He told me more than once about his proudest moment.  When Sissle and Blake’s “Shuffle Along” opened on Broadway in 1921, not only was it the first black-written Broadway show, it was also the first produced, directed and performed entirely by blacks.  But there was a problem, and it involved a song called “Love Will Find a Way.”  In 1921, unburlesqued, romantic love between black people had yet to be tried on a white audience.  There were dire predictions of everything from boos to bloodshed.  The way Eubie told it, on opening night, his partner Sissle was standing at the backstage exit with one foot inside the theatre, and the other pointing north toward Harlem, “And me,” Eubie said, “I was stuck out there in front, leading the orchestra where my bald head would catch all the tomatoes and rotten eggs.”  Fortunately, the song was well received, and another racial barrier came down.  “Shuffle Along” ran 504 performances and helped to launch the Harlem Renaissance of the 20’s.
And he never let me forget that all his accomplishments should be measured from his starting point -- a Baltimore ghetto and a fifth grade education.  He said that long after he quit playing “bawdy houses,” he still thought the first word in that description was “body.”  He related that with a chuckle, but there was a lot of sensitivity (and this was his phrase) “to not be ignorant around white folks.”  Spelling and grammar had been a life-long learning project for him.  At age 66, he graduated from NYU with a degree in musical composition.  At dinner (if you didn’t head him off) he’d explain – at length and with great enthusiasm – the Schillinger System of composition, even writing bits of music on the tablecloth.  And, trust me, it’s too deep for mere mortals.  He went on to receive honorary doctorates from five universities, the Presidential Medal of Freedom from Ronald Reagan, a Grammy nomination for his 1969 album, The 86 Years of Eubie Blake, a U.S. postage stamp with his picture on it, and lots more.  All that from a Baltimore ghetto and a fifth grade education!
Even at 94 Eubie had it all together.  What a charmer he was!   A little man with a big personality and a joyous legacy to share. Of course, his natural habitat was the piano keyboard, and much of what Eubie played delighted him, so he cheered himself on.  Loudly, sometimes!  Audiences loved him, whether it was millions watching on TV, or fifty in a small club.  On nights that he didn’t have a gig, he wanted to go where the piano action was, and he was welcomed everywhere as piano royalty and shown right to the keyboard.  One night an over-served matron, who hadn’t caught Eubie’s introduction came by afterward to shake his hand and say he was “really good.”  She asked if he’d ever played professionally.  Our hero smiled charmingly and said, “A little, Darlin’.”  Nobody that cool should ever be forgotten!  Fortunately, YouTube has some Eubie Blake videos, so you can see for yourself.
©2012 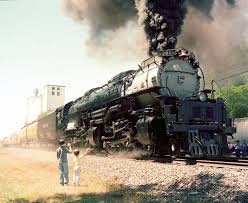 My dad loved trains.  And he loved to drive. When he bought our 1935 Ford, my brother and I were little kids in the back seat, and on Sundays we’d drive for miles up the Pacific Coast Highway just for the scenery.  No freeways then, just a wonderful two-lane highway and hardly any cars on the road.  If we got lucky we’d see a lot of trains, and the Southern Pacific still had many steam locomotives on the line.  In some spots, the highway ran right next to the rail line.  Passenger trains were no fun because they were pulled by the new, streamlined diesel locomotives.  The magic moment came when we’d spot smoke up ahead.  “We’ll catch him,” my dad would promise as the car surged ahead.  I still remember the thrill of pulling alongside one of those huge, fire-breathing monsters -- so close that I was engulfed by the awesome force of that fierce, black beast with the stacks belching smoke and the drive rods flying back and forth.  “That’s a six-eight wheeler,” my dad would shout.  The drive wheels were bigger than our car.  And all this raw power close enough so that I could see the engineer plainly.  My dad said if I waved, he’d wave back.  And he did!  All this time my mother was urging him to slow down.  No dice.  “He’s got a grade crossing up ahead,” my dad would yell, “You’ll get to hear the whistle.”  I not only heard it, I saw the whistle blow.  Two looong wails, and a couple of short toots.  What a treat!  My dad also wanted to be the first car at the crossing when the gates came down.  So there  we’d be, just yards away when the engine thundered by, and the boxcars came clanking and rumbling behind.  Nothing he liked better than a long, long freight so he could read all the boxcars.  (This was before Amtrak and globalization brought us boring, anonymous containers.)  “See that B&O,” he’d shout above the roar, ”That’s Baltimore and Ohio.  Came right by my house when I was a boy in Cleveland.  Look!  New York Central.  All the way from the East coast.”  I grew up with boxcar geography.  At home, our L.A. neighborhood was on the right side of the tracks – but just barely.  Two blocks down, there was a light-rail line that serviced the warehouses along Sepulveda Blvd., the main drag.  The workhorse down there was a klunky yellow diesel-electric switch engine – a terrible comedown from the charging iron horse of the high-speed rail.  And what’s worse, it had an obnoxious, clanging bell that we could hear clear down at our house.  But it hauled all the same boxcars and we could see them for just a short walk.  More boxcar geography.  “Look,” my dad pointed, “Louisville and Nashville, I’ve been there.”  He sounded proud.  Denver and Rio Grande, Illinois Central, Canadian Pacific, Midland Valley Railroad, Erie Line, New York, New Haven and Hartford.  Before I was old enough to leave home, I got some travel stickers and stuck them on my guitar case so it looked as though I’d been to far-flung places.  When I actually went to far-flung places, it wasn’t by train.  So I wrote a love song to those old steam locomotives.
http://www.youtube.com/watch?v=4XFbwvSo3UU&feature=related
COME BACK CASEY JONES by the Demonstrators (My hand-picked studio band) featuring John Schlocker on banjo, the marvelous Roy Zimmerman on vocals, and Marty Rifkin with some extraordinarily nifty dobro.
©2011
Posted by Ellen Griffith at 2:48 PM