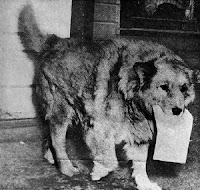 It's been said that, properly trained, a man can be dog's best friend.  Of course, we all know that the other way around...it's automatic.
During my misspent youth as an itinerant musician, I had a tendency to make four-footed friends in far-flung places.  Flash back to Anchorage, Alaska where our band was stranded and I found myself driving a cab.  Old John was a huge, brown wooly dog who owned the Red Cab office on Fourth Avenue.  He would lie in the doorway and grin at everyone who stepped over him going in and out.  The old sourdoughs in the Union Bar across the street told tourists that he was part Kodiak bear, and some believed it – he was that big and wooly.  Every morning he’d walk down the block to the coffee shop and look through the glass door, tail a-wag, until someone gave him a donut (always wrapped in a paper napkin) so he could bring it back to the office for our coffee break.  About once a week we’d give him a couple of dollars and he’d mosey down to the mom and pop grocery where they’d give him a bag of kibbles in exchange for a couple of drooly dollar bills.  The sight of Old John poking along the sidewalk carrying the bag of dog food home to the office caused commerce on 4th Avenue to pause while everyone watched and smiled.  (His picture made the Anchorage Daily Times for that.)  He also knew that if he stood outside the Anchorage Grill looking hungry he’d get a bag of scraps and steak bones for dinner.  Frequently, traffic on 4th Avenue (the main drag) came to a standstill while John strolled leisurely across the street.  Occasionally, he’d sit down halfway and slowly scratch an ear.  Drivers were willing to wait, knowing that Old John pre-dated any sort of traffic regulations.  During the summer, John liked to ride along with his head out the cab window, and the drivers knew he was good tourist bait, so cruising for fares with John in the passenger seat was a popular thing to do.  The trouble was that sometimes in the shuffle with multiple passengers and lots of luggage, John got left behind somewhere on the outskirts of town.  He didn’t seem to mind.  He’d wander around, make a few new friends, then sit by the road and wait for a cab.  Once when I was coming back empty from the airport, I got a call, “Car 45, John’s out on Fireweed Lane near I Street.  Pick him up and bring him home.”  There he was, waiting.  He hopped in, put a muddy paw in my lap, licked my face once, and settled down for the ride home.
© 2008
Posted by Ellen Griffith at 2:03 PM