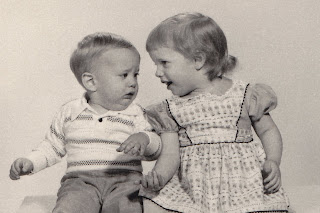 ﻿
They call it Mother's Day...but all mothers remember when every day was Kids Day.


It was Kidville Central.  Three mothers in side-by-side apartment buildings with eight kids all under six.  Our husbands, blue collar workers, escaped every morning in the family car, leaving us knee-deep in small fry with no way out.  Since it was the 60’s, we liked to imagine how great our lives could be if we weren’t wading in rug-rats.  We saw ourselves with flowers in our hair, joyfully following the Grateful Dead…until a crash and a kid’s shriek brought us back to earth.  Back to house arrest at the zoo.  The obvious occupational hazard here was Cabin Fever, and we all had it.  But with careful planning between naptimes and feeding times (much like the zoo) it was possible to escape.  Pop the baby in the stroller, let the toddlers tag along, and…ahh, fresh air!  Ahh, scenery!   With luck, you could make it to the market and back with a box of Hamburger Helper.  But If Cabin Fever was avoidable, Kiddie Fever was not.  Kiddie Fever, Judy said, was when you tied your OWN shoe laces in double bows.  We all caught it.  Claire’s symptom: she had the youngest in her lap and when she set him down on his feet and gave him a little push… he fell flat on his face! The kid on her lap was not the toddler, as she had (mindlessly) thought, it was the 9-months-old, who was not yet walking.  And that probably didn’t help. I remember hurrying into the bathroom with a pair of tiny sox to throw into the laundry hamper.  Distracted by the three-kid bedtime ritual, I lifted the wrong lid…and tossed them in the toilet.  What made it worse – two tots at my elbow saw the goof before I did.  It’s never good when they’re smarter than you.  Which reminds me that when Don first started talking, Susie – 13 months older – could translate some of his jabber when no adults could.  The bizarre result of that was waking her in the middle of the night on one occasion to translate what was wrong with Don.  No, it’s never good when they’re smarter than you because, as mothers know, much of mothercraft is an ongoing scam.  I remember putting a tight hug on a screaming five-year-old Susie in the middle of a big early-morning earthquake and by the time the shaking and rumbling had stopped, I’d convinced her that it was the same kind of bumpy fun as the rides at Pacific Ocean Park.  By then the littler ones woke up and wanted to know what in the world was going on, and Big Sister told them it was an earthquake and it was a “fun ride.”  The sweet little scret to all this kiddie chaos which we didn’t usually admit was that, in spite of the measles and chipped teeth and thrown toys, with a little creative problem-solving, Kidville could be fun.  When they're still little, kids are cute.  When they’re old enough to talk, but too young to win an argument, kids are cute.  When Susie was about five, she called me to the window to point out that the strange people next door were putting clothes under the hood of their car “where that dirty engine is.”  It was a Renault, probably the first rear-engine car in our neighborhood, and the storage space was in front.  Susie was relieved to know that. Then there was the time when Don had been listening to grown-up conversations about Douglas Aircraft (where his grandfather worked) merging with McDonnell (Aircraft).  He was seven or eight (and usually hungry) so he wanted to know if we could get free hamburgers.  My favorite Cute Kid Quote was when two-year-old Wayne saw his first ground fog -- so thick that the buildings across the street were invisible.  He ran back inside and said, “Mommy!  The air’s all fuzzy out there!”  Ahh, yes…Kidville! 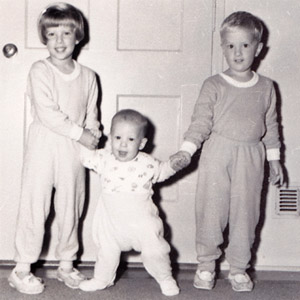